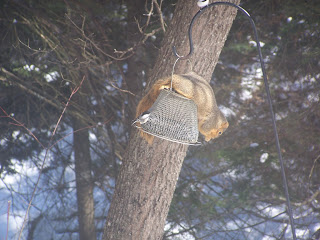 It's the day after Christmas. Sometime during last night, I was awaken from my post-Christmas stupor by thunder and lightening. That's not normal for Northern Michigan in late December. Now, during midday, the temperature is surpassing 50 degrees. We were just far enough into winter that the dog and I were adjusting to the silence.

I live in the woods, you see. So when winter throws its white blanket upon us, there's a soft sigh as the noise lessens, and lessens, and lessens. Like dropping a bouncing ball, winter noise becomes a high-pitched ping, a softer boing, a few little bouncing rattles and then settles into silence. And that's it until sometime in March.

Now the dog can't shut up. Only a month ago, what sounds like racket to her now, were just normal wood noises and did not warrant barking. Now she's protecting me from every twitter, chirp, chatter, drip and rattle. Dried leaves and branches brushing against almost bare trees on this windy day sends her into courageous lunges at nothing. "It's not normal!" she insists as she adds to the cacophony. 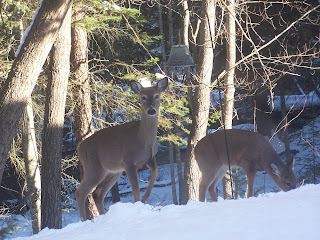 As her barks echo off the high banks on the other side of the creek, the birds and squirrels and deer could care less. They are claiming the ability to do more than just seek food. Oh, they're eating for sure. But the woods around my home is more like a noisy diner than an intimate restaurant. They're sliding out of their quiet booths and coming together on stools at the counter.

Winter will be back soon. There are promises of cold and snow on the way. High winds and whiteouts are just west of me and heading east I hear. We'll see. Right now, it does not even seem possible as I step out into this temperate weather.

But we in Northern Michigan know better than to expect any kind of weather to last. So for now, we're all living out loud.
Posted by Deborah Martin at 4:25 PM