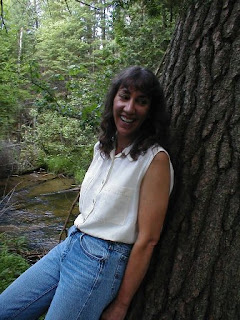 With August, we finally got summer. It was brief. Now, with the onset of September, I'm seeing more of the golden flowers that mark the end of summer. Around my home, there's a burst of Black-eyed Susan and Goldenrod. And today is the day of the Corn Moon, the full moon in September that in older times marked the time to harvest the corn.

As I fall deeper and deeper into the acknowledgment that summer is waning, I seek with eagerness the solace of a September that will embrace me with a sense of home; that is, that deep and unconditional welcome that rarely comes from any other source but going home. Home does not have to be literal in the sense that it is the house, the dwelling, the town in which one lives or grew up. Home can be, and more often is for me, falling into the embrace of nature, especially during this time of year. There seems to be nothing more motherly, more welcoming, more at home, than nature's autumn embrace in the North Country. I'm antsy to see what has occurred locked away in the woods around my home when the summer's heat and biting insects kept me from exploring more deeply.

I'm in the eddy. I've taken a break. I've swung out of the current, pointed myself upstream 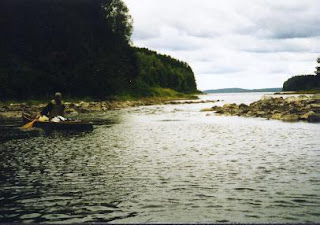 behind a boulder or a fallen log, and allowed myself to breathe. I've become quiet so I can hear the world turning and get my directions.

For those of you who don't paddle, an eddy is the downstream side of an obstruction in the river. It's a place in the river, because of that obstruction like a log or a boulder, where the water is moving more slowly and in a different direction, in a circular flow as the water backfills into the pocket created behind the obstruction. Eddies are most useful to paddlers as a place to rest, read the river, and make decisions about the next move up or down the river. Paddling from eddy to eddy, slipping into an eddy for a break, gives you the opportunity to assess your next move. Often, when running rapids, I enter and exit a series of eddies as a way to pause and pick my path. The key is in the timing.

With autumn nipping at my heals, the timing is just right. I'm in an eddy of my life as well as a more seasonal eddy. September and I have swung out of the current, taking a break, assessing our next moves. Breathing.

Come on in, the water is just fine.